My earlier post on this topic is one of the most frequently visited on my blog. So I thought I would add some further comments.

To recap: The date given by Tussaud’s for the waxwork of 1765 is 3 years too early for the figure to be Madame Du Barry, the mistress of Louis XV. One of her biographers, Philip M Laski, in ‘The Trial and Execution of Madame Du Barry‘ (1969), states that Du Barry (then using the name Jeanne de Vaubernier) first met Louis XV in May 1768. Being a member of the aristocracy was essential for her to become the official royal mistress.and her marriage to Comte Guillaume du Barry took place on 1st September 1768.

Now I noticed that Rodama had some interesting theories on her blog including both Du Barry and Madame St Amaranthe, a beautiful young woman guillotined during the Terror for refusing Robespierre’s advances. Rodama also suggests that the image may be a doll-like figure and not based on a life model.

If the date of 1765 is accurate then Louisa O’Murphy, one of the ‘petites maitresses’ of Louis XV could have been the model. This young woman, born in Rouen of Irish (Traveller?) ancestry, had previously been the model for Francois Boucher, one of the foremost painters of the Rococo age, as seen in his painting of the ‘Blonde Odalisque’. Boucher’s paintings had drawn the king’s attention to her. 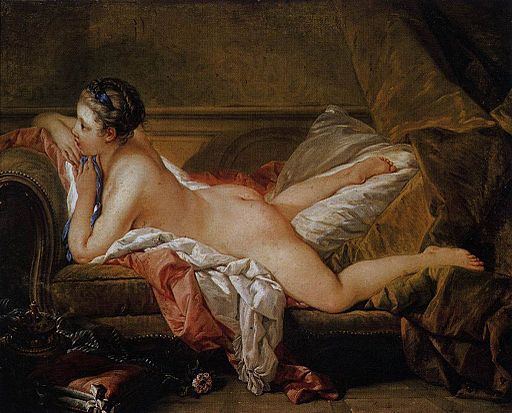 O’Murphy would have been 29 at that time of the waxwork and although her relationship with Louis XV had waned, there had been rumours of her returning to the Court following the death of Madame de Pompadour in April 1764. If she had been the model I speculate that it could even have been an attempt at self-promotion.

O’Murphy (Morfi to the French) was also linked to the ‘Parc aux Cerfs’ (Stag Park), Louis XV’s private harem. An alternative suggestion is that one of the other girls from the Parc aux Cerfs might have provided the model. The Parc aux Cerfs was set up during Madame de Pompadour’s lifetime, after her sexual relationship with Louis XV ended. It was maintained after Pompadour’s death by Le Bel, the king’s valet, and closed when Du Barry became the mistress. There are interesting parallels with the modern day Epstein/Maxwell case: Madame de Pompadour was rumoured to recruit and ‘supervise’ the inmates.

For a fabulous fictionalised biography of Madame Tussaud, try Edward Carey’s ‘Little’: the voice, the vocabulary and the imagery make it a luxury to read; the text is full of quirky illustrations in the style of the ones on the cover:

To see the work of Boucher in a beautiful (but expensive) art catalogue, try: